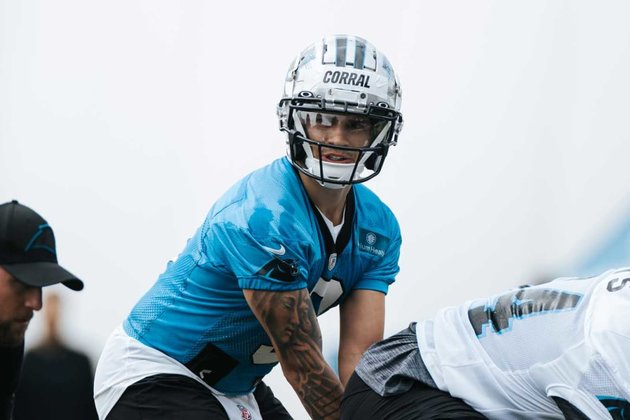 CHARLOTTE - From the moment he was drafted in the third round by the Panthers, quarterback Matt Corral was ready to prove people wrong.

But Friday morning, his immediate goals were to navigate a jump rope, and take his progression through the depth chart a step at a time.

Corral's at the top of that chart this weekend while surrounded by a couple of undrafted rookies in Davis Cheek and tryout quarterback Anthony Russo, but that will change next week when starter Sam Darnold is back on the field with him.

"If I know the playbook, I'm going to be ready to play," Corral said when asked about that role. "As far as getting ready to be a starter, of course, my mentality is to be a starter. But right now, I'm trying to get on that 53-man roster."

The Panthers quarterback situation is admittedly complex, as head coach Matt Rhule said Friday that he "wouldn't say no" to a veteran addition, while affirming that Darnold would start if they had to play someone today. At the same time, he underscored the importance of competing for jobs, not ruling out a chance for Corral to earn a larger role. He also said that the prospect of trading a future third-round pick for Corral was a "no brainer" because they think he has a bright future.

Corral is confident, and always has been. Rhule said that as they evaluated the Ole Miss quarterback, they were drawn to the way players were drawn to him, but the real evaluation hinged on his effectiveness on the field.

"When we watched the tape, we loved the way that Matt played. "At the end of the day when we went back, we loved the way he played. His release, his moxie. He's gotten injured a little bit because he runs guys over or tries to run guys over. But at the end of the day, it's still a game of who has the ability to throw the ball. And we just love the way he throws the ball. His release, his vision, his timing - we thought it would translate over to this level."

Corral said he's always had a bit of a chip on his shoulder, but it "got even bigger" when he went from thinking he'd be a first-round pick in a Las Vegas green room to falling to the 94th overall pick, late the following night.

But Friday, it was back to the basics. Of elementary school gym class, perhaps. New offensive coordinator Ben McAdoo had the quarterbacks working on footwork by having them jump rope, while they counted reps.

"There were a lot of new things today," Corral said. "Coaches want it, we're going to do it, and we're going to execute it to the best of our ability. That's what he wanted, so that's what we did.

"I kind of liked the jump rope. That was a fun competition."

And that's what Corral is here to provide.

- Rhule was asked about a recent report that the Panthers were "eyeing" former Saints coach Sean Payton as a future coach, and said owner David Tepper called him to tell him it was coming. After a pair of five-win seasons, Rhule understands this is part of the landscape.

"My job is my job; I'm going to attack it," Rhule said. "We'd love to have everything be smooth sailing. I wake up when things happen, when stories come out, when unnamed sources say this, anything adversity happens, I say, 'How lucky am I that I get a chance to overcome this adversity and be a better coach, person, man, father because of it?' I always hope it brings a better connection with our players and I. Because our players live a life where they never know what's going to happen for them, and I have a much greater feeling for that anxiety they go through.

"With regards to that report, the first I heard of it, Dave called me and told me that it was going come out, that they had called him, and there was nothing to it. I know Dave Tepper well enough to know he wouldn't be talking to another coach right now."

Rhule said that when he first met Tepper, they talked about the team needing a "rebuild," which convinced him to "come be a part of it and build it with him."

- During the pre-draft process, a number of people referred to new Panthers tackle Ikem Ekwonu as a "tone-setter" and praised the way the former N.C. State tackle stood out on the practice field.

But while they have big expectations for Ekwonu - he's their left tackle, after all - they also expect him to continue to push.

"He's a rookie right now, and this is a veteran-driven league," Rhule said. "What you did college, that's great, that got you here, now it's what you do once you're here. The tone-setters on this team are Christian McCaffrey, they're Taylor Moton, all those guys. Young guys should come in; they shouldn't take a back seat to anyone, they're all competing, but it's about what you do moving forward.

"Some guys come here as first-round picks, some guys as undrafted free agents. To me, they're all Carolina Panthers, and it's about what they do moving forward. I'm excited to see them all."