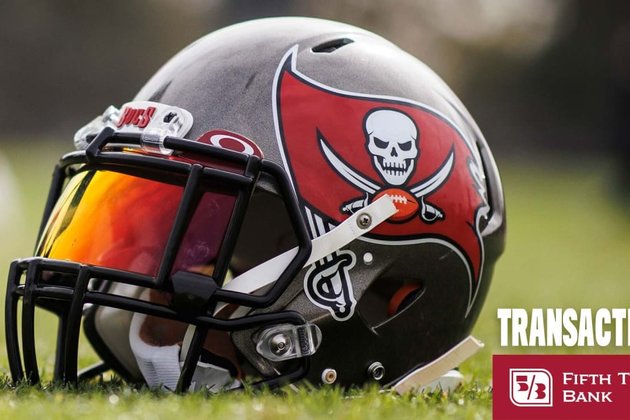 The Tampa Bay Buccaneers added 13 more rookies to their 2022 offseason roster on _day, pulling in additional young talent from the ranks of draft-eligible player who were not selected during the seven rounds from Thursday through Saturday. That group includes the nation's 2021 "Triple Crown" receiver, a rare NFL prospect out of Wisconsin-River Falls and the younger brother of an established NFL defender.

The addition of a baker's dozen undrafted players brings the total number of rookies on the Buccaneers' current offseason roster to 21. Tampa Bay selected eight players in the 2022 NFL Draft over the weekend, beginning with Houston defensive lineman Logan Hall. Players like Hall, second-round guard Luke Goedeke, third-round running back Rachaad White and fourth-rounders tight end Cade Otton and punter Jake Camarda could carve out substantial roles immediately. Their undrafted peers might need a bit longer to get a solid foothold in the NFL but the Bucs' roster is littered with players who came into the league as undrafted players, from Shaquil Barrett to Cam Brate, Cam Gill, Cyril Grayson and others.

Here are the 13 players the Buccaneers have signed so far as undrafted free agents in 2022:

The three wideouts on the list are all smaller pass-catchers who had prolific 2021 campaigns.

Sterns (5-9, 195), in particular, put up enormous numbers in his one season at Western Kentucky, leading the nation in catches (150), receiving yards (1,902) and touchdown receptions (17). That marked the second straight year that a player has won the elusive "Triple Crown" among college receivers, as 2021 Eagles first-round pick achieved the same feat at Alabama in 2020. The only other player to do so over the last 20 years was Michael Crabtree with Texas Tech in 2007.

Thompkins (5-8, 155) wasn't far behind Sterns, hauling in 102 passes for Utah State and producing 1,704 yards and 10 scores. He set the single-season school records for catches and receiving yards and racked up 170 or more yards in five separate games. Thompkins production earned him first-team All-Mountain West honors and third-team All-American honors from the Associated Press.

The numbers for Geiger (5-10, 180) weren't quite as gaudy as his fellow undrafted signees but he was the second-leading receiver on the Red Raiders' prolific offense. A transfer from Troy, Geiger used his one season at Texas Tech to record 44 receptions for 533 yards and a touchdown, along with 12 carries for another 98 yards. Geiger also has some experience as a kick returner.

Tampa Bay also added two off-ball linebackers in the so-called "eighth round" of the draft after not hitting that position during the seven formal rounds. One was the Rutgers standout, Fatukasi (6-2, 240), who racked up 302 tackles in 53 career games and was a semifinalist for the Butkus Award each of the past two seasons. He is the younger brother of Folorunso Fatukasi, who is a defensive tackle for the New York Jets and a former sixth-round draft pick. The other, Russell (6-1, 225), played at Memphis, had a nearly identical career tackle total as Fatukasi, with 306, and also amassed 24.0 tackles for loss and five forced fumbles. He was a first-team all-conference choice in 2021 after leading the team with 123 stops and added 6.5 tackles for loss, 1.0 sack, one interception, one forced fumble and eight QB pressures.

Ozougwu (6-2, 236) and Young (6-3, 230) will provide competition at the outside linebacker spot. Ozougwu transferred to Arkansas State in 2021 after three seasons at North Texas, where he was a teammate with current Buccaneer wideout Jaelon Darden. He stepped right into a major role on Red Wolves defense and in 12 games produced 57 tackles, 2.0 tackles for loss, a half-sack, two passes defensed and a forced fumble. Young played five seasons at Old Dominion, starting his career with a selection to the Conference USA All-Freshman team in 2017 and ending it with all-conference honorable mention accolades in 2021. Last season, he started 13 games and led the team with 104 tackles to go with 7.5 tackles for loss and 2.0 sacks.

The Buccaneers loaded up at safety in free agency with Keanu Neal and Logan Ryan and also added cornerback Zyon McCollum in the draft but still had room for a few more defensive backs on the 90-man roster. They found that with the "eighth round" acquisitions of safety Nolan Turner and cornerbacks Don Gardner and Kyler McMichael.

Turner (6-1, 205) played a whopping 65 games over six years at Clemson, racking up 259 tackles, 20 passes defensed, seven interceptions and 3.0 sacks in that span. He earned second-team All-America honors from the AFCA in 2020 and then fought through injuries as a "super senior" in 2021 to contributed 69 tackles, 2.0 sacks and an interception. Gardner (6-1, 180) started all 23 games for South Dakota over the past two seasons and capped his collegiate career with second-team FCS All-America honors from the Associated Press. He led the Jackrabbits with seven pass breakups last year and finished fourth on the squad with 44 tackles. McMichael (6-0, 210) played one season at Clemson before transferring to North Carolina and appearing in 21 games with 16 starts over the past two campaigns. Last year, he recorded 18 tackles, one interception and a pass defensed.

Beise (6-5, 255) could become just the second player ever from Wisconsin-River Falls to play in the NFL, and the first in over eight decades. Running back/defensive back Johnny Blood logged 14 seasons in the league with five teams, including the Green Bay Packers, from 1925-38. A converted quarterback, Beise was named a Division III first-team All-American by the AFCA as a senior in 2021 after producing 414 all-purpose yards and four touchdowns.

Blackwell (6-5, 308) will try to become just the second Ball State product to crack the Bucs' regular season roster, following cornerback Maurice Harvey, who played 14 games for the team in 1984. Blackwell, who earned second-team all-conference honors in 2020, has starting experience at both guard and tackle but is expected to begin his work with the Buccaneers on the interior line.

Continuing the theme, Cook (6-6, 305) could blaze a trail for Montana products as the first one to appear in a game for the Buccaneers. A former quarterback, Cook started 23 games over his final two seasons with the Grizzlies and was also a finalist for the William Campbell Trophy, which is known as the "Academic Heisman."