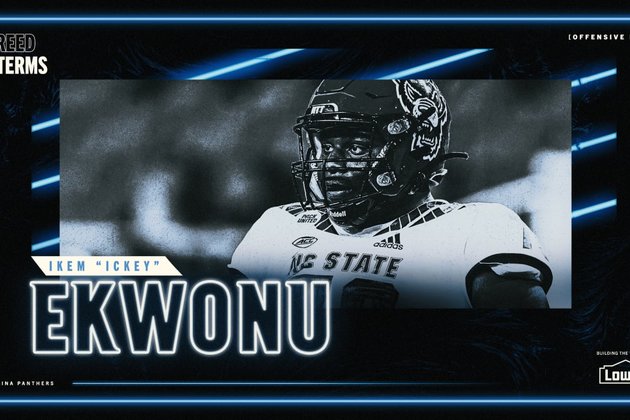 CHARLOTTE - When Panthers first-rounder Ikem Ekwonu arrives for rookie minicamp later this week, he'll have one key piece of business taken care of.

Ekwonu agreed to terms on his four-year rookie contract Tuesday night. The deal includes an option for his fifth year.

The left tackle from N.C. State is scheduled to be on the field with the rest of the draft class and some other selected players this weekend at rookie minicamp.

The Panthers have high expectations for the Charlotte native, as they identified him as the top overall player on their board. That made his availability with the sixth overall pick an unexpected but welcome surprise.

He's a key component of the offseason's renovation of the offensive line, which also included the signings of guard Austin Corbett and center Bradley Bozeman.

And he's also close to home, having grown up here and starring at Providence Day School (in football, theater, and several other activities) before moving onto college.

"I actually had a Thomas Davis jersey growing up," Ekwonu said the night of the draft. "And I actually met Thomas Davis this morning as well. So, it's kind of crazy how things line up. I was at the NFC Championship game when they beat the Cardinals. I was right in the end zone. I've been to a couple of games.

"I've been able to see the ups and downs of the team and am just fortunate to have such an impact on the team's legacy."