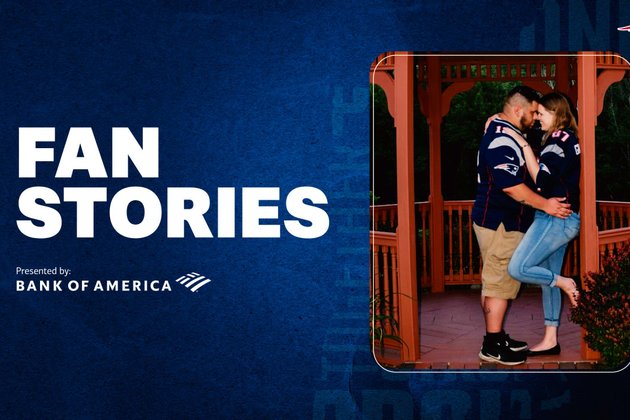 For Christina Procon and David Gondek, the Patriots have been weaved through the fabric of their entire relationship.Alexandra Francisco

When you know, you know.

And when it came to Christina Procon, watching the Patriots' run to the Super Bowl together in 2018 was all it took for David Gondek to realize he wanted to marry her.

Proposing to the girl he crushed on since middle school wouldn't happen for almost two full years, but when he finally got around to popping the question this past November, their favorite New England team was a big part of the occasion.

With the way their relationship played out to this point, it was only right.

"They've been a part of everything," Procon said of the Patriots bringing them together as a couple. "It's our thing."

Growing up in Chicopee, Mass., an adoration for football that was inspired by their fathers was adopted long before they met at Bellamy Middle School.

The two were just acquaintances growing up, though Gondek had Procon's name circled in his yearbook to signify the crush he had on her. But after high school, that shared love for the Patriots helped them keep in touch - even while Gondek was stationed in Japan, South Korea, Germany and North Carolina serving in the United States Air Force.

On a brief trip home to Massachusetts in 2014, Gondek attended a Patriots game and sent her a picture of her favorite player - Rob Gronkowski - to spark up conversation. It worked, but the distance between Chicopee and Germany was too daunting for Procon to begin a relationship.

"We literally didn't speak since graduation in 2008, and he just sent me this message out of the blue," Procon said. "I mean, that's the way to my heart. Anything Patriots was a good idea. We started talking and he asked me out on a date, but he was still in the Air Force stationed in Germany a long time."

During the next four years, they both dated other people, but Procon's friend referred to "Germany Boy" as "the one who got away."

Little did she know, Gondek was keeping close tabs.

When he returned from the Air Force, she coincidentally moved back to Chicopee from the Berkshires around the same time. More importantly, Procon was newly single - something Gondek took notice of while attending an NFL game with friends.

Thanks to some liquid courage and a pep talk from his buddies, Gondek shot his shot.

"I just didn't want to miss my shot again," he said.

Of course, morning came, and Gondek phoned Procon to apologize for the drunken phone call she woke up to. She wasn't sorry he called, though.

Their first date came in 2018, watching a late-season Patriots game against the Miami Dolphins. She's not the type to forget any big plays but recalls being so nervous that the entire game was a blur.

Despite that, the date was a success. They continued watching games together all postseason until a Super Bowl victory against the Los Angeles Rams gave them their first celebration as a couple.

"If they didn't make the playoffs that year we would have had like three games to watch together and it would have been over," Procon said. "Pizza and Patriots games. Our first few pictures together were in jerseys watching games. He brings out the crazy Pats fan in me and I like it."

She certainly brought out something in him, too.

Not long after the Patriots added another championship ring to their collection, Gondek went out to get one for Procon.

It was early in the relationship, but he soon went out to buy her the perfect ring - a Patriots one commemorating the Super Bowl - to hold on to for the perfect time.

"I just knew who I was with and who I wanted to be with the rest of my life, so I was just waiting for the right time and everything," Gondek said. "I bought it, I talked to her friends to try to get her ring size and everything, and I just wanted it in my back pocket for the right moment."

That time came in November of 2020 while decorating the Christmas tree together, but the engagement ring won't be the only Patriots reference in their nuptials.

They took their engagement photos in jerseys. For their Jack and Jill they had custom Patriots shirts printed with the number 22 for the year they're getting married. Groomsmen will wear socks with the team logo, a mini Patriots football will substitute in the garter toss, and instead of a guest book, their closest friends and family will sign a white New England jersey with their soon-to-be shared last name.

"I feel like guest books, in general, are boring," Procon said. "Who goes through them? I wanted something that was us. We bonded and started dating because of our mutual love for the Patriots. It's the reason why he talked to me. If he never had the guts to message me about the Patriots we wouldn't be getting married. It's perfect."

After a long time in the military surrounded by friends with opposing football allegiances, Gondek is thrilled to finally have someone rooting for the same team by his side.

"Sports are my life," Gondek said. "I wouldn't have it any other way."