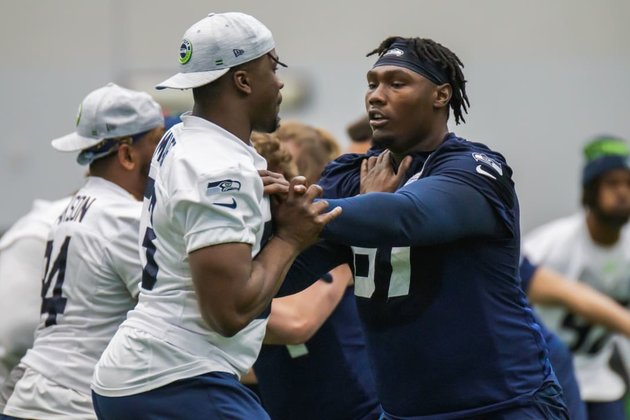 The Seahawks wrapped up a three-day rookie minicamp on Sunday, giving coaches their first look at the team's nine-player draft class and the group of 14 undrafted rookies who signed last week, as well as the tryout players trying to state their case for a spot on the 90-man roster.

After camp wrapped up, Seahawks coach Pete Carroll met with the media to give his thoughts on the past three days of work. Here are six things we learned from Carroll about the three-day rookie minicamp:

1. The tackles are who the Seahawks hoped they were.

When a team takes two offensive tackles in the first three rounds, and especially when one of those is a Top 10 pick, the hope is that those players can contribute both in the short and long term. And while it was only three days of work, Carroll was encouraged by what he saw out of first-round pick Charles Cross and third-round pick Abraham Lucas.

"The tackles jumped out right off the bat," Carroll said. "Both guys look well-equipped, physically. They look like they can move like we would hope they can move. They're both bright kids, and will pick up their stuff, so the process is underway. I was really fired up about that."

As for what that means when the 2022 season rolls around, it's too soon to say, though Cross would seem to be a very strong candidate to take over the starting job at left tackle, while Lucas will likely compete at right tackle with 2021 undrafted free agent Jake Curhan, who started five games late last season.

"I'm excited about the competition of it," Carroll said when asked about where things stood at tackle. "We'll see how it goes, and it's a great opportunity for Stone (Forsythe). This is his chance. And Jake (Curhan) got to start a resume last year playing, and did a nice job, and so they'll come back. And I've already talked to these guys, they see the game differently already as they do when they go from the Freshman to Sophomore year, it just flips so much. So we'll see if they can take advantage of what they see new, and I know Jake is really fired up about coming back, and just not being in the blur of camp and all that. So, we'll see how it goes.

2. Working with second-round pick Boye Mafe is "like molding clay."

Boye Mafe, a second-round pick out of Minnesota, didn't start taking football seriously until high school, and he was considered a raw but talented pass-rusher early in his college career, but a strong senior season and standout performance at the Senior Bowl helped him become a top draft prospect and a player the Seahawks were thrilled to land early on Day 2 of the draft. As a player still growing into his considerable potential while also learning a new system, Mafe showed over the weekend not just his athletic ability but his ability to learn and grow.

"Boye did a really good job, and he really had a chance to show," Carroll said. "It's just like molding clay. He's such a new player to what we're doing. It's going to be really exciting to see what he can do because he's got great physical tools."

3. Ken Walker III looks like a back who can do it all.

There's no doubting Ken Walker III's ability as a ball carrier, not after he won both the Walter Camp Award and Doak Walker Award after rushing for 1,636 yards and 18 touchdowns last year. But there's more to playing running back in the NFL than being a great ball carrier-backs also need to be able to pass protect and catch the ball out of the backfield, amongst other things, and in Walker's case he caught only 13 passes last season and 19 in his career. In his first practices with the Seahawks, however, Walker showed off good hands and the ability to handle everything asked of him.

"Ken can do everything we need him to do, there's no question," Carroll said. "We've seen him on film. We've seen him play the game. We needed to see how he learned and how he picked things up, and he's going to just roll right through it."

4. Linebacker Vi Jones was one of the undrafted players to make a good first impression.

Almost ever year an undrafted rookie or two ends up on the 53-man roster-last year it was Jake Curhan, who finished the year as the team's starting right tackle-and while it is way too soon to start predicting which undrafted player could make the cut this year, one who caught Carroll's attention over the weekend was N.C. State linebacker Vi Jones, who started his career at USC before transferring to N.C. State.

"He looks the part," Carroll said. "He's quick and really athletic. He's got a good general background of what he's played, and you can see, he's got a lot of athleticism. He's really fast, really fits the bill. One of the guys that wasn't the draft picks that I totally picked up on, was excited to see him. And you can picture, he could be a special teamer, he could play a little bit outside, play a little inside backer for you, if you need him to, and he'll be able to match up with guys. So he had a good camp, a really good camp."

"These guys are doing a marvelous job," Carroll said. "I'm really impressed. I will say that forever on these guys. Their command of what we're doing and their attention to the teaching process, is really something. We're teaching differently than we have."

6. This was a more normal rookie camp.

The past two offseasons were altered by the COVID-19 pandemic, resulting in less time on the field with players, rookies included, or in the case of last year's rookie minicamp, fewer players on the field. This year, however, the Seahawks had the usual full roster of draft picks, undrafted free agents, tryout players, and a few returning players who are eligible because they do not have regular-season playing experience.

"It does feel more normal, and we're able to do everything that we normally have done in the past, so it gives these guys the best chance," Carroll said. "Now they come back, and they'll be involved in the off-season after this camp, and it's just the right staging to teach all that they have to learn. So, it feels good, feels right, and we'll try to max it out."