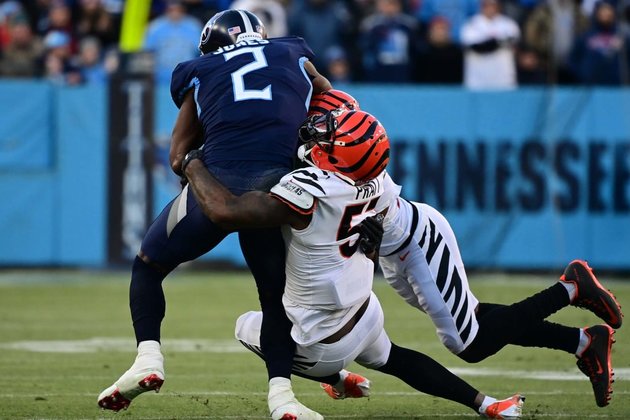 This is why Reggie Williams, the only linebacker to play in both Bengals Super Bowls, is fiercely proud of his number and never wanted it retired when friends suggested No. 57 should blitz into history with his 206 games, second most in all of Bengaldom.

"I like seeing my number still making plays," Williams says these days from his Florida home. "It was such a big moment for the whole defense, the whole city, for Who Dey Nation. He's a thinking man's linebacker, like I had to be.

"He saw it. He read it and executed it flawlessly. My heart was in my throat when the quarterback launched it. Then I saw a flash of color at the goal line. Our color."

His Honor, the only player to start in a Super Bowl while also lining up at city council meetings the last time the Bengals went to the big game, is a big lobbyist of linebacker Germaine Pratt, the current No. 57. He was talking about the interception that saved the Wild Card win over the Raiders, but he's also a fan of linebacker Logan Wilson, the other linebacker that ended the defense's last stand with another interception the next week in Tennessee.

"Their relationship reminds me of what I had with Jim LeClair when we went to the first Super Bowl," Williams says. "This defense is kind of doing what we did (in 1988). Turnovers and we made big plays when we turned it over."

Williams, who has the most interceptions (16) and sacks (62.5) of all Bengals linebackers, was on a 1988 defense that forced five turnovers in their two playoff wins heading into the Super Bowl. Pratt's Bengals have six turnovers in the last two games.

He felt even more kinship with Pratt when he read Branson Wright's story for The Undefeated that detailed Pratt's affinity for old school R and B music passed down from his mother. Pratt, who is known as a walking film vault (another trait Williams admires), watches his Xs and Os to the sound track of The Spinners and Patti Labelle and the like.

That's right down the Motown two-gap of Williams, the Flint, Mich., native who went home to Detroit for Super Bowl XVI. He still remembers Diana Ross gently pushing him out of the way to get to midfield to sing the national anthem and how "It pleased me."

He also has a connection with Pratt's college. North Carolina State is also the school of Seattle quarterback Russell Wilson, Williams' close family friend and author of the preface to Williams' memoir.

The late Harrison Wilson, Russell's father, played with Williams at Dartmouth, and when Harrison worked at Procter & Gamble his son was born in Cincinnati during that 1988 season. He was born Nov. 29, between Riverfront Stadium wins over the Bills and Chargers and his dad probably didn't make those.

"His father was a great wide receiver and a great teammate," Williams says. "I would get him tickets for the games when they lived here. I saw an interview with Russell where he said he was rooting for the Bengals. It's where he was born. So I feel like I've got kind of a connection to N.C. State."

Williams is also friends with one of the greatest Chiefs of all-time, Pro Football Hall-of-Fame linebacker Willie Lanier. Lanier's last season, 1977, was Williams' second, but he's been a lifelong fan. Williams wore his No. 63 at Dartmouth. They've been friends ever since they met at an event where Williams' let out a "There's my hero," when he glimpsed him.

"Willie Lanier called me out of the blue before the Bengals played the Chiefs a month ago and explained to me why the Bengals would win," Williams says. "He focused on the defensive weaknesses and the threat of (Joe) Burrow to the different wide receivers. He felt like they were a little too cocky and needed a loss, that it would be good for them. He called that. They've played great ever since the loss here in Cincinnati. They'll be much more determined."

Williams' grueling comebacks from countless of devastating knee surgeries that nearly cost him his leg have made him a big fan of Burrow's own comeback from knee rehab. The renaissance of his old team has matched his improved health at age 67.

"I go out now with my Bengals gear in Florida and I get complimented," Williams says. "It's good for my glee. The Glee Factor. I'm even rooting our kicker. What a great guy. I would have done what Joe Burrow did and kissed him."

For this Bengals AFC title game, the first without Williams at linebacker, he'll sit in the same chair he watched Pratt and Wilson pick them off with an eye on No. 57. Bengals president Mike Brown liked to remind Williams that he was Dartmouth, class of 1957.

"He would say no, but I say that's a special reason to be proud of the number," says Williams, who is hoping his fellow Big Green alum brings home the number on the Lamar Hunt trophy Sunday night. "I said it when we were up there for (the 1981) reunion. This could be the year we can win the Super Bowl. You just have to believe. I believe."