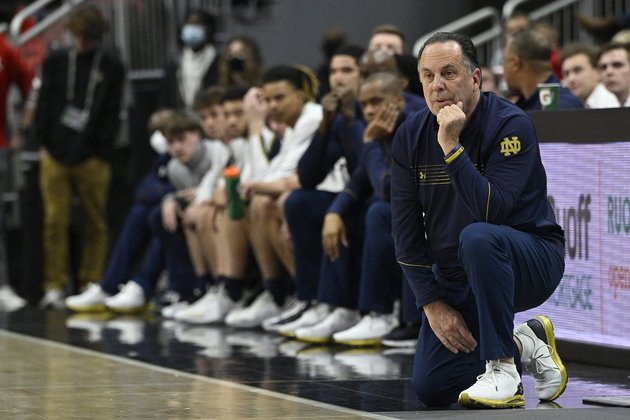 Averaging 58.2 possessions per 40 minutes, Virginia plays the slowest pace in Division I men's college basketball, according to KenPom.

The Cavaliers' turtle tactics have served them well in coach Tony Bennett's 13 seasons. And that might be the best way to slow the roll of the Atlantic Coast Conference's hottest team when Virginia (12-8, 6-4 ACC) travels to Notre Dame (13-6, 6-2) for a clash in South Bend, Ind., on Saturday.

With nine wins in their past 10 games, the Irish are in high gear behind an offense that functions cohesively thanks to a trio of veterans. Dane Goodwin, Nate Laszewski and Prentiss Hubb have been fixtures in the rotation since 2019.

"Those three seniors who have been through it all together have been men for us in this stretch," Notre Dame coach Mike Brey said. "They're delivering for us. It's really cool to see."

Notre Dame has lost six straight games to Virginia and trails in the series 16-2. But the Cavaliers have been vulnerable this month to teams looking to settle a score.

It's been an unusual see-saw season for the Cavaliers, who have followed each of their eight losses with a win. The latest example came Monday when Virginia went wire-to-wire with the lead in a 64-52 win over Louisville. The Cavaliers had 20 assists on 24 made baskets with Reece Beekman dishing out a season-best 11 dimes.

With a four-day layoff between games, the Cavaliers have had plenty of time to prepare for the Irish.

"They can shoot it from all five spots," Bennett said. "They're playing very good basketball. Another veteran team with a freshman guard (Blake Wesley) who's on the draft boards."