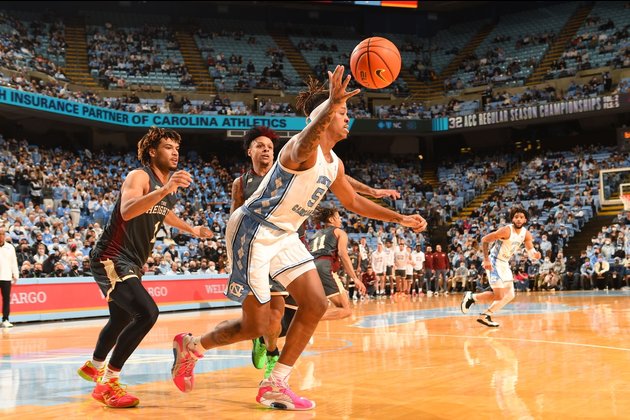 The latest win for UNC came Wednesday, 58-47 over visiting Boston College. Stout defense led the Tar Heels to a victory as the Eagles shot a season-worst 6.3 percent from 3-point range. Boston College also had just five assists to nine turnovers, and was held to 6-of-28 shooting -- 21.4 percent -- in the second half.

North Carolina was playing its third game in five days and won despite shooting 29.1 percent from the floor. It was the first win ever for the Tar Heels when shooting less than 30 percent.

Caleb Love led the way with 16 points. Armando Bacot had 18 rebounds, but just six points on 1-of-10 shooting.

"A win is a win," first-year UNC coach Hubert Davis said. "That's why I talk a lot with the team about us being really good defensively. And that's why I always talk about energy, effort and toughness, because those are things that are in our control and things that you can bring every given day."

NC State played Wednesday night, too, falling 73-65 at Notre Dame. The Wolfpack turned the ball over 13 times and allowed the Irish to score 20 points off those mistakes. NC State also missed five of 12 free throws and let the Irish grab 11 offensive boards, which they turned into 13 second-chance points. Notre Dame also knocked down 11 3-pointers, while the Wolfpack had just six makes from that range.

"I think that was the biggest difference," NC State coach Kevin Keatts said. "They had 33 points from the 3-point line, and we had 18. It was an eight-point game. That was the difference."

Against the Irish, Dereon Seabron tallied 21 points and eight boards. It was the ninth 20-point game of the season for the sophomore, who is third in the ACC in scoring with 19.0 points per game.

This is the first of two regular-season meetings between the Tar Heels and Wolfpack. They'll play in Raleigh on Feb. 26. UNC has the all-time advantage in the series, 114-49.