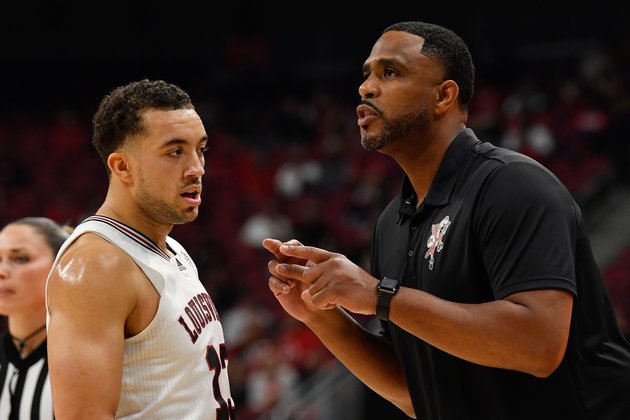 Changes for Louisville ahead of meeting with No. 9 Duke

It's often hard to overshadow whatever storyline might be associated with Duke, particularly as Hall of Fame coach Mike Krzyzewski approaches the final weeks of his last regular season in charge.

But Louisville has managed to do that.

There's a coaching change with the Cardinals, making it a major part of the storyline when No. 9 Duke visits Louisville on Saturday afternoon.

Assistant coach Mike Pegues will be directing the Cardinals after Chris Mack's departure on Wednesday, two days after a 64-52 loss at Virginia. Pegues was elevated to interim head coach for the remainder of the season.

Louisville (11-9, 5-5) has lost five of its last six games. After Saturday's game against the Blue Devils, the Cardinals stay home for Tuesday night's matchup with North Carolina before the first road game since under Pegues on Feb. 5 at Syracuse.

"Coach Pegues is ready to lead this program through the home stretch of the season, and I encourage everyone to pack the KFC Yum! Center to show our players how much the Louisville community cares about Cardinal Basketball," Mack said in a statement.

Pegues, who is Delaware's all-time second-leading scorer, came with Mack from Xavier. He filled in for the first six games of this season when Mack served a school-related suspension. The Cardinals were 5-1 to begin the season.

"I have complete confidence in Mike Pegues, who did a tremendous job leading the team in November and I am comforted that he has agreed to lead us the rest of the season," Louisville interim athletics director Josh Heird said. "We have set a high bar for expectations for our basketball program, on and off of the court, and we will continue to strive to meet those goals."

Duke will have a coaching change at season's end, with Jon Scheyer taking over for the retiring Krzyzewski.

In the meantime, the Blue Devils will arrive at Louisville holding a two-game winning streak after Tuesday night's 71-69 squeaker against visiting Clemson. The Blue Devils have won four of their last five.

Roles are evolving for the Blue Devils, particularly as they cope with the absence of injured guard Trevor Keels. He has missed the past two-plus games, with Jeremy Roach moving back into the starting lineup.

"With Trevor out, it just makes more responsibility for me," Roach said. "I'm doing whatever it takes to win, next man up, and I think I've been pretty solid."

Others have come to the forefront at times while freshman Paolo Banchero has been among the most productive players in the ACC. Banchero leads the team with 17.9 points per game.

Post player Mark Williams is a combined 24 of 30 from the field in the last four games.

Also, reserve Joey Baker has provided a boost with perimeter shooting. His leadership has been emerging as well.

"I talked to him privately about it -- that he's a big-time Duke veteran in these last couple of games," Krzyzewski said.

Duke's 10-of-20 shooting on 3-pointers in the Clemson contest marked the third game this season in which the Blue Devils have been at or above 50 percent from beyond the arc. Louisville is shooting 32 percent on 3-pointers for the third-worst rate in the ACC.