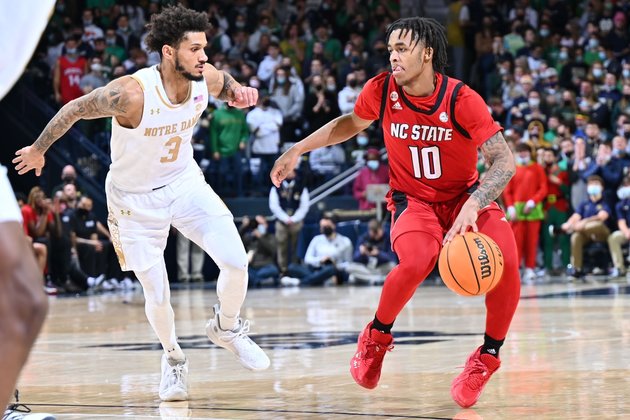 Nate Laszewski scored eight of his 18 points during Notre Dame's 15-0 run early in the second half as the Fighting Irish defeated visiting North Carolina State 73-65 on Wednesday night at South Bend, Ind.

Dane Goodwin racked up 17 points, Blake Wesley had 15 points and Prentiss Hubb provided 11 points and five assists as the Fighting Irish improved to 8-0 in home games. Wesley, a freshman guard, has posted a double-digit point total for 16 consecutive games.

NC State's Dereon Seabron has reached double figures in every game, posting 21 points. Jericole Hellems notched 14 points and Casey Morsell and Cam Hayes each had 10 points for the Wolfpack.

Hellems sat out a second-half stretch with four fouls, while Morsell fouled out with 2:07 to play. Hellems later fouled out. Seabron and Morsell each pulled in eight rebounds. Freshman standout Terquavion Smith was held to four points, shooting 1-for-9 from the field.

Laszewski made four of five 3-point attempts to help him to his second-highest scoring total of the season. He also pulled in a game-high 11 rebounds.

Notre Dame trailed early in the second half before Laszewski ignited a 15-0 run for a 45-35 advantage.

The Wolfpack closed within three before the 10-minute mark. Inside of 1:30, NC State had a chance to cut into a 65-59 hole, but a turnover proved costly.

The game was knotted at 30-30 at halftime. The largest margin for either team in the first half was NC State's 16-11 edge before the Irish scored the next six points. Seabron had 11 points by the break.