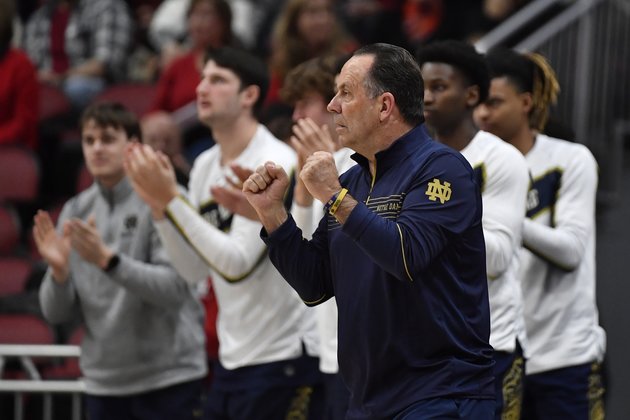 The recent results have been good for Notre Dame. Coach Mike Brey said much of that is connected to improved defensive play.

"We've been better overall defensively. We've shown signs that we're better in that department," Brey said. "We try to control tempo with our offense more, and that has helped us."

"We know how hard this is," Brey said. "The competition has been great."

The Wolfpack (10-10, 3-6) have won three of their last six games, but it has been almost two months since the team has won back-to-back games.

NC State shot a season-best 60 percent in Saturday's 77-63 home victory against Virginia. That was the most points allowed by the Cavaliers this season.

It helped that NC State's Terquavion Smith and Jericole Hellems combined for 41 points and connections on nine 3-point shots.

NC State's Dereon Seabron is third in the ACC in scoring with 19 points per game and second in rebounding at 9.4. His offensive abilities should create openings for teammates.

"The advantage is that if he's a willing passer, we're going to get some open shots for some other guys," Wolfpack coach Kevin Keatts said. "Lately he's done a great job of finding some guys when he couldn't get all the way to the paint. That was important. He's having a good year. He's adjusted to the way people are playing him, and I think that's important to our team."

The Wolfpack could have more scoring options with the emergence of transfer Casey Morsell, who is back at full strength following an ankle injury.

"He got a little frustrated because he couldn't perform the way he was performing early in the year," Keatts said. "I think him getting back healthy has certainly helped our team. He's probably our best on-ball defender. He's got great size. He knows how to play."

It's largely a balanced attack for the Irish, led by Dane Goodwin at 15.2 points and freshman Blake Wesley at 15 points per game.