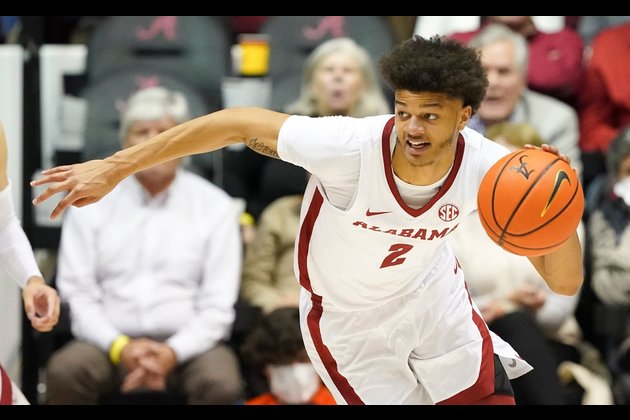 No. 24 Alabama tries to reverse course at Mississippi State

After a home loss to rival Auburn on Tuesday, No. 24 Alabama will aim to get back on track in a road contest at Mississippi State on Saturday in Starkville.

For Alabama, the loss to Auburn snapped a 17-game winning streak at home in Tuscaloosa, Ala.

"I thought our guys fought hard to get back in the game at the end," Alabama coach Nate Oats said, referencing the 14-point deficit the Tide battled back from. "We needed to play our best game in order to win that one and we didn't... We didn't execute like we needed to down the stretch."

Jaden Shackelford and Jahvon Quinerly -- the Tide's top two scorers -- were held to a combined 27 points on 8-of-33 shooting, a 24.2 percent clip. Shackelford and Quinerly average 16.1 and 15.4 points per game this season, respectively.

Keon Ellis has led Alabama in rebounding this season, and he grabbed his 100th board of the year against Auburn. Ellis averages 6.3 boards and 12.1 points per game. He's also made a team-best 43 of 49 free throws this season.

Against Auburn, though, Darius Miles led the Tide on the glass with nine boards while also scoring 10 points in 29 minutes off the bench. Oats was impressed with his play.

"Darius is huge for us. Darius is practicing harder and is practicing with more consistency," Oats said. "He's always had the physical tools to be great for us. Skilled player. I think he's done that these last couple weeks."

Mississippi State (11-4, 2-1) is coming off an 88-72 home victory over Georgia and is looking to put another tally in the win column.

Iverson Molinar led the Bulldogs in scoring in that victory, notching 28 points on 11-of-18 shooting while also adding seven assists, three rebounds and two steals. And Molinar did all that while turning the ball over just once in 34 minutes.

"I have been working on my game for the longest," Molinar said. "Only having one turnover and being able to score like that... I feel good. I was able to make plays for others and make my things easier for my team on the offensive end and being aggressive."

Molinar averages 17.5 points per game this season, and the Georgia game was the 12th time in the junior's career that he has scored at least 20 points in a game.

"That's the Iverson I expect to see the rest of the year," Mississippi State coach Ben Howland said.

The leading rebounder for the Bulldogs this season has been Garrison Brooks. The former North Carolina Tar Heel is averaging 6.7 boards and 10.8 points per game. Against Georgia, Brooks contributed four points, four rebounds and four blocks.

Saturday is the first of two meetings this season between the Bulldogs and Tide. They're scheduled to play again on Feb. 16 in Tuscaloosa.